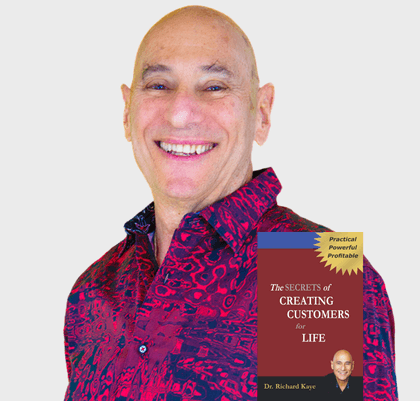 Dr. Richard Kaye, a retired chiropractor, is best known as a business growth strategist. For 25 years he’s been serving the entrepreneurial community, enhancing a culture of collaboration and cooperation. Richard is an internationally acclaimed lecturer, having presented seminars and workshops in Australia, France, Japan, and Russia, as well as in the United States.

Richard has shared the stage with Lisa Nichols, Jack Canfield, Berny Dohrmann, and myriad other leading entrepreneurs. He has been featured on KTLA television, in Los Angeles, California, and had a PBS special about him. He was recently awarded the prestigious Lifetime Achievement Award at the Publicity and Publishing Conference (PubPubCon). Richard is also known for his program “The Secrets of Empowering Negotiation” which was featured in Forbes. His book, The Secrets of Creating Customers for Life, helps entrepreneurs grow their businesses from the inside out! Richard resides with his wife, in Taos, New Mexico.