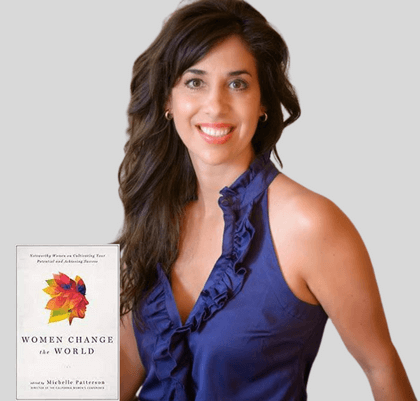 Michelle works with companies as a Strategic Advisor to help them get their messages out to the world. She is the founder of the Global Women Foundation, a non-profit public charity created to bring women together to create global change by empowering them to
transform their communities. Its mission supports women to effectuate this change through serving as a worldwide conduit for connecting community, mentoring, education, and financial support.

A successful event promoter; a lauded business accelerator (youngest Regional VP and National Sales Trainer for Robert Half, the world’s largest specialized recruiting firm); a sought-after media commentator (The Huffington Post, CNBC, Fox Business News, Bloomberg, a regular guest on ESPN radio and hundreds of TV and radio stations); an energetic and engaging public speaker; host of a weekly radio show on Women Network Talk Radio; Ms. Patterson is also the headlining author for a women’s anthology, Women Change the World, featuring notable celebrity contributors as well as five other books. Ms. Patterson was invited to speak as a keynote to the United Nations on the topic of Women and the difference they are making in our world. Projects she has spearheaded include building out Groupon Getaways with 200,000 attendees nationwide; Taste of Ladera with over 20,000 in attendance; Cannabicity, an online virtual community for everything Cannabis, and TouchPointe Technologies, bridging innovation and talent around the world.

Recently Ms. Patterson was honored with the Los Angeles Business Journal’s Corporate Advocate award at their 23rd annual Women’s Summit, as well as the Women’s Elevation Award presented by Pepperdine University at their Global Perspectives Conference. She is currently a board member for Loyola Marymount University Bellarmine College of Liberal Arts,
her Alma Mater where she served as Student Body President. In 2014, Ms. Patterson was knighted Dame Michelle Patterson for her humanitarian work by the Knights of the Orthodox Order of St. John Russian Grand Priory, a thousand-year organization known for their work founding hospitals. She was also honored as “Woman of the Year” by the World Boxing Council at their annual conference in Las Vegas, and she graduated from Leadership California (class of 2015), a unique program designed to develop and mobilize
female leaders.

In 2016, Ms. Patterson was awarded a “Lifetime Achievement Award” by President Barack Obama and the Corporation for National and Community Service for her lifelong commitment to building a stronger nation through service. Beyond her notable business success, Ms. Patterson is most passionate about her family. She lives in Orange County, California with her husband of twenty years, Eric, a successful corporate CFO, and their two beautiful children, Jaclyn and Chase.