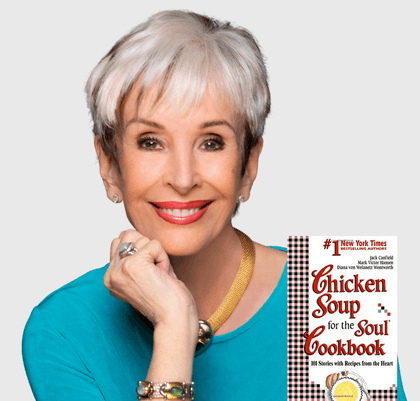 Diana von Welanetz Wentworth is a New York Times bestselling an award-winning author of ten books. She was the first coauthor with Jack Canfield and Mark Victor Hansen in the most popular book series of all time, Chicken Soup for the Soul (500 million sold).  As a lifetime entrepreneur, she hosted a long-running television series with her late husband Paul von Welanetz based on their six cookbooks and their celebrity-studded cooking school in Los Angeles.  Leaving the cooking world, Diana and Paul founded the Inside  Edge (www.InsideEdge.org), a weekly breakfast speaker forum in Southern California that helped launch the careers of many of the most celebrated authors and transformational speakers of the past thirty-five years including Jack Canfield, Dr. Barbara DeAngelis, Dr. Susan Jeffers, and Louise Hay.  She is a certified life coach and yoga teacher.  Film rights to her popular romantic memoir, Send Me Someone: A True Story of Love Here and Hereafter, were purchased by the Lifetime Network.

Always a futuristic thinker, Diana originated the party concept over 36 years ago of showing up as your future self in five years.  Jack Canfield, speaking recently acknowledged that he has used that party concept as the closing of every training he has done since his Inside Edge days.  He also said that the Chicken Soup for the Soul series would not have existed without Diana and the Inside Edge.

At the age of 80, Diana is considered a legend.  She is a living example of the life-enhancing power and magic of heart connection in her forthcoming eleventh book Expect Magic!  Expressing her passions for personal evolution, spreading joy and community building through a series of new projects related to living the most amazing life in your mastery years (after 60), she sparks renewal in all she meets.