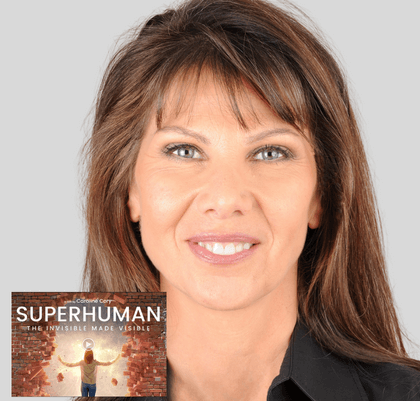 Caroline Cory is an award-winning filmmaker, author, and the Founder of the Omnium Method of Energy Medicine and Consciousness Studies. As a child and throughout her life, Cory has had numerous E.S.P (extra-sensory) and “paranormal” experiences, which led her to become deeply connected to spirituality, the study of consciousness, existential topics, and the mechanics of the universe.

After teaching Energy Medicine and Consciousness Studies for over a decade, Cory founded Omnium Media, an entertainment and media platform that tackles thought-provoking topics on the human condition and the nature of reality. In addition to writing and producing, Cory continues to lecture and coach internationally on various mind over matter subjects and appears regularly as a guest expert on supernatural phenomena at major conferences and television shows including such popular series as The UnXplained with William Shatner and History Channel&#39;s Ancient Aliens.

Her films include, AMONG US, SUPERHUMAN: THE INVISIBLE MADE VISIBLE, and A TEAR IN THE SKY.